A piece of embedded criticism.

Just before I sit to write this I see that at 8:04am this morning I received an email from My Heritage DNA – Congratulations Pippa your DNA results are now ready. I pause. Fuck. Instead of opening the email, I open this word document.

I’ve been thinking a lot about what this role of embedded critic means and how I feel incredibly biased because I’ve been excited about i will still be whole (when you rip me in half) since I saw it was announced on twitter. And I know why I felt so invested so early on: Representation.

It’s a word that I find myself repeating so much (at Bechdel Theatre it’s one of the words we use to describe the aims of our podcast, we chat about gender and representation). However, it’s a word that has become so ingrained in my vernacular, repeated so many times that much like “diversity”, I worry that I find it becoming more hollow, losing grip of what it so importantly signifies. It becomes another buzzword, a tick-box, meaningless. How convenient for the white-cis-hetero-capitalist structures that benefit from it’s minimisation. I remind myself of Riz Ahmed’s speech at the House of Commons where he explains that diversity is regarded like a sprinkle of salt but representation should never be considered an added extra. When I discuss the specific representation of Asian people, I often excitedly adopt the portmanteau,  ‘representasian’ and hashtag the fuck out of it. Trying to find community. Trying to make us visible. I know how important meaningful representasian is to the writer of this show, Ava Wong Davies. I passionately apply for this role.

I’ve been excited by I will still be whole… because I feel like it’s the first time I can see characters so deeply similar to myself in ways that feel so important and ground-breaking even within in my own representation bubble. East Asian and White. Mixed. Queer. I find this funny because I haven’t even described personality traits or characteristics. It’s identity. It’s culture. Do I have nothing but these macro ideologies to describe myself? I always desire to see issues around sexuality, race etc. to be secondary to a characters’ lives on stage (to move past being labelled a GAY PLAY, A CHINESE PLAY etc.). Although there’s probably some form of wording on my Bumble profile that basically says I AM A PROUD MIXED-RACE LESBIAN (#femmestruggles amiright?). I think I might even use my other favourite portmanteau, “gaysian”.

As a millennial whose life and work is embedded in identity politics and the importance of seeing yourself reflected I worry I forget about actually having any substance. Forget my cultural “identity”. Who am I really? Am I an extrovert or introvert? Kind or selfish? A listener or a talker? A creative or a critic? I know that my personality is deeply fused with my identity, intertwined with one another. The way I navigate life is dictated by hierarchical structures and invisible oppressions (as well as a whoole load of privileges). This influences my interests, my passions…or am I just scared there’s nothing else really there?

The first day in rehearsal I find myself on the edge both physically and mentally; sitting at the side and anxious. I feel like an imposter, infiltrating a space already carved out with group guidelines, collective snacks and a journey already started days before my arrival. I’m an intruder. But like, a welcome one. I feel like I want a visitor’s badge I can return at the end of the day. Yet, I’m invited into the routine “check-in” with everyone else. I’m present. I’m ready. I sit. I watch. 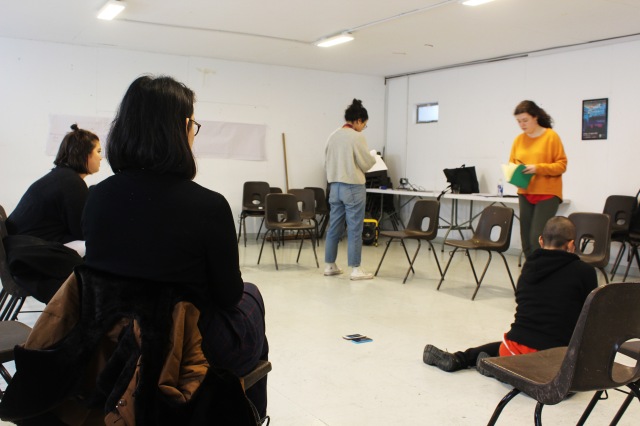 The play begins with a series of monologues between two women: a mother and daughter. Separated. Different. Curious. Ava’s writing is rich and poetic, at once urgent and demanding yet soft and lingering. When I watch EJ (Rosa Escoda) and Joy (Kailing Fu) deliver these words I have to wait a second to let their meaning settle.

As I watch the actors at work under Helen Morley’s patient and guided direction, I’m grateful for their pauses, for these silences are filled to the brim with intrigue, longing and heartache. EJ searches for meaning in everything and everyone around her: from a midnight fox to the black mould in her bathroom. Joy isolates herself and struggles with her inner conflict. I take in the magic of Ava’s words and the spaces between them. I feel healed.

My favourite exercise in the rehearsal room was to note down every time a body part or body function was mentioned. In one scene I list 21 parts and 15 functions. In the rehearsal everyone agrees that the play is undeniably about bodies, searching for bodies, covering bodies, nourishing bodies. I think about my own body and the war-torn path we share together. The clashes we’ve had, the disappointments, the attempts at forgiveness. EJ experiences something similar as she traces her face, recognising her White fathers’ features and torments herself trying to find her Chinese-Malaysian mothers’. To see the battleground of a young East-Asian/White woman’s body represented feels almost overwhelming. This is the nuance, the detail, and the truth I celebrate when women of colour write from experience.

When it comes to watching the play I am again aware of bodies, but this time of being situated within the audience. I realise that the only people I can see scribbling in notebooks are myself and the beloved critic, Lyn Gardner, beside me. I had introduced myself to her and chatted before the show started because #teamlyn, but then I think about how inferior I feel calling myself a “critic” of any kind. I feel a panic rising at the thought of writing and publishing this response. I notice a young woman with her chin in her hand as she leans forward with a smile plastered to her face throughout. I smile to myself.

It’s fascinating to watch the show and see familiar scenes and choices and actions yet to see it all heightened to the nth degree. The mystic lighting (Ben Kulvichit) and sound (Amanda Fleming)  emphasises the beauty and the density of the dialogue. The actors are fuelled with spirit and focus. I feel surprisingly relaxed.

The reunion scene comes all too soon and I realise that almost the whole play is over. It’s been an intense 45 minutes. In rehearsals I wanted this scene (where they meet for the first time) to be volcanic, to erupt with the fury and anger from the pain and the soreness that overwhelmed both EJ and Joy. I gripped my pen each time I watched it. However, that’s not the world this play sits within and it took me until the final performance to realise that. Sure, there are outbursts as EJ calls Joy a “cunt”, but everything simmers beneath, and the reality is actually much more bizarre and hilarious as both party realises they will never fulfil the expectation of the other. It reminds me of The Meg-John and Justin Podcast in which two relationship and sex educators talk about the “scripts” we’re given on relationships, and our panic when confronted with a situation we don’t know the script for. When someone says I love you, you say it back. When a mother gives birth to a daughter, she must raise her. I see EJ and Joy struggling to know what script they are supposed to use. Writing it as they go. Desperate to start again. The archness of Kai’s responses and the disappointment in Rosa’s expression communicates this perfectly.

I think back to my DNA results. My nervousness over opening them, not because of what it could say, but because of how I might react. How my mind might forge links between some highly problematic ethnic excavating exercise and my own sense of self. I consider EJ in i will still be whole, what did she hope to find when she made contact with the woman who gave birth to her? Really, my situation and hers are highly incomparable.

The play doesn’t end wrapped up neatly and as an audience member I am unsatisfied yet comforted. I think about how much it meant to EJ to find out if her mother accepted her sexuality. How, as a queer audience member, those last lines lingered for me. I hope perhaps, for EJ, it was on some level the sense of closure she craved.

I wasn’t sure what exactly an embedded critic was supposed to be when I started this process and having finished it i’m still not entirely sure I’ve done it. However, I feel invigorated by the depiction of people like myself in this play. I feel grateful to have had this opportunity to observe and reflect and respond. I am excited for the future because I know more people who are like me are on stage, writing, directing, producing, designing, reviewing. I hope this play continues its life beyond this festival. I hope we continue to embrace representasian. I hope one day we don’t need that fucking word.

I open the email.

If you want to catch myself, Beth, Lyn and Ava discussing criticism, gender and representation, we’re hosting a LIVE podcast event at Vault on Sunday 10th March. Come join us and book your tickets here.

One thought on “On DNA and i will still be whole (when you rip me in half).”