Heading up to Edinburgh Fringe and looking for shows to see that break from the stale/pale/male standard?

Want to see something that represents you/the world as you recognise it/the changes you want to see/the FUTURE?

Listed below are our pick of the shows we have on our radar to help you plan your most entertaining and intersectional Fringe visit, without a one-man-show in sight. These are either shows that we’ve seen in previews, or have on our radar via HEAVY recommendation and solid assurance that they pass the Bechdel test. Follow us on twitter, instagram, and fb, and subscribe to our podcast for regular updates detailed run-down of our favourites once we’ve seen them. 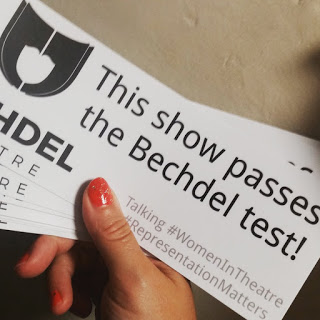 If you’re going to Edinburgh during August and have or see a show that you think we should be talking about, please contact us by email: bechdeltheatre@gmail.com. And make sure you say hi if you see us walking around in our Bechdel Theatre badges or t-shirts!

One last thing before the list – we would really appreciate your support if you enjoy our work:

Thanks for supporting, and happy Bechdel testing ❤️

PS. If you’re not going to Edinburgh Festival Fringe this year, or don’t have time while you’re there to cram all these amazing shows in – we got you covered! Many of these productions are previewing in England before they head north of the border so we’re flagging those up, and as always we’ll be updating you on our podcast and social media whenever they announce a new transfer or tour – you will not miss out! 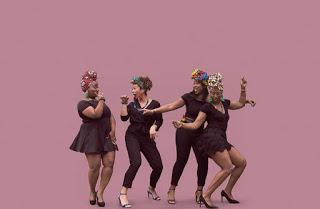 Queens Of Sheba Underbelly, Cowgate
18:50 August 2 – 26 (not 13)
An unflinching look at misogynoir, this four-woman show does not shy away from the harsh realities faced by black women, but raises up their voices with joyously powerful words by Jessica Hagen.
Listen to our podcast featuring Michelle Barwood reviewing Queens of Sheba when we saw an early preview of it last year.
If you’re not going to Edinburgh you can see Queens of Sheba opening the Autumn season at New Diorama Theatre in London Sept 4 – 8.

Sparks Pleasance Courtyard
11:30 August 1 – 26 (not 8, 13, 20)
Written and performed by Jessica Butcher and Anoushka Lucas, this story of love and grief with an original live music score was a hit at VAULT Festival. Edinburgh Fringe goers, get ready to experience the astounding array of talent in this all-female team. 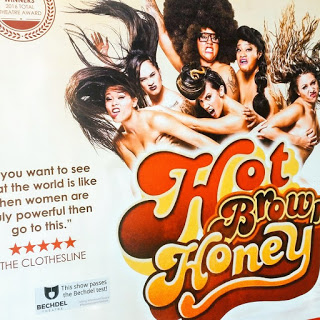 Hot Brown Honey Gilded Balloon Teviot
19:30 August 2 – 27 (not 8, 15, 23)
This show’s been heavily featured on our Edinburgh recommendations lists for the past 3 years as a flawless piece of pure feminist empowerment, but we’ve heard that this year may be their last ever Fringe! If you haven’t seen this all-WOC circus cabaret troupe of sublimely badass Aussies then make sure you don’t miss your chance to join the revolution #DecoloniseAndMoisturise.
Subscribe to our podcast to hear our interviewwith a couple of the HBH Hive.
If you’re not going to Edinburgh you can see Hot Brown Honey at the Southbank Centre in London on 24 – 28th July, and also catch the show they’ve co-created with a team of creative UK Femmes of Colour: Hive City Legacy at Roundhouse July 10 – 21.

F**k You Pay Me Assembly Rooms
15:25 August 2 – 26 (not 14, 21)
This one-woman show BY strippers and FOR strippers features Joana Nastari as Bea, who is on her way home from working (as a stripper) to face the judgement of her Catholic family who have just discovered what she does for a living. This show won a People’s Choice award at VAULT Festival, and we heard so many people raving about it with such passion that we feel like it’s got potential to reach cult-fave status before August is out.
If you’re not going to Edinburgh you can get a taste of F**k You Pay Me at their preview on July 27th at Hoxton Square Bar + Kitchen.

WHITE Pleasance Courtyard
11:30 August 15-27 (not 20)
Koko Brown uses her loop pedal and spoken word to tell stories from her experience of growing up mixed race. This show has been a hit with audiences at VAULT Festival and Ovalhouse, and is part of Koko’s trilogy of three shows about race, gender, and mental health.
If you’re not going to Edinburgh Koko is part of Hot Brown Honey’s (aforementioned) Hive City Legacy at Roundhouse, and has produced (and is performing at) Please Tick One: an unapologetic celebration of mixed race artists at The Cockpit on July 24th.

One Life Stand Summerhall Roundabout
21:45 August 1 – 26 (not 2, 7, 14, 21)
Middle Child, electrifying gig-theatre-makers and Paine’s Plough associate company, are returning to Edinburgh with a new play about sex and intimacy, with a cast that features previous Bechdel Theatre Podcast guest Tanya Loretta Dee. Listen to Tanya on our 2017 Edinburgh Fringe podcast episode when we talked to her about the play she was in last year:, ‘Offside’,which is currently touring the UK with a new cast.
If you’re not going to Edinburgh you can catch One Life Stand at several different venues in Hull during July (including several Pay What You Can performances, and one BSL-interpreted performance on July 9th), and at Latitude Festival.

Power Play: Funeral Flowers, Next time, Somebody, The Empty Chair Power Play Pop-Up HQ
13:00, 14:30, 16:00, 17:30 August 4 – 25 (not 7, 14, 21)
Power Play are taking over a whole house in Edinburgh that they’re calling POWER PLAY HQ. Alongside staging four brand new plays by and about women, they’ll be hosting activist events and one-off specials exploring and celebrating gender and representation at Fringe. They’re also undertaking a massive data survey analysing gender representation at the Fringe. Safe to say we’ll be spending a fair bit of time in this house of power!

Ladykiller Pleasance Courtyard
13:00 August 1 – 27 (not 14)
The latest offering from The Thelmas, uber feminist champions of new writing, is a blood-soaked morality tale by Madelaine Gould about social responsibility, zero-hours contracts and tearing up the gender rule book on psychopathy.
If you’re not going to Edinburgh you can catch The Thelmas first full-length show, Offie-nominated Coconut by Guleraana Mir on tour until the end of June. 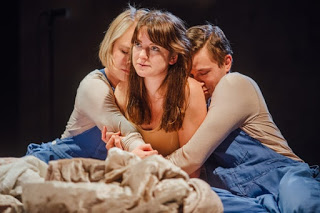 Skin A Cat Assembly Rooms
16:10 August 2 – 25 (not 13)
Isley Lynn’s disarmingly hilarious and deeply personal story of self-love, sex, and acceptance was the our number one feel-good hit of 2015, and we’re SO hyped to see it back, with Lydia Larson returning to the lead role of Alana.
If you’re not going to Edinburgh Skin A Cat is previewing at Offbeat Festival in Oxford, and Brainchild Festival in Sussex, and will be touring the UK in Autumn.

Finding Fassbender Pleasance Courtyard
11:45 August 1 – 27 (not 13)
Speaking of Lydia Larson, if you enjoy her sparkly-eyed warmth and dulcet Wolverhampton tones in Skin A Cat, be sure not to miss her starring in her own writing debut about a woman moving down to London from the Midlands and discovering a weird connection with a Hollywood actor.

Clingfilm Pleasance Courtyard
23:00 1 – 27 (not 13, 20)
This comedy cabaret trio are returning to Edinburgh Fringe after the success of their last show about body image, Private View. This one sees the unlikley girl band exploring what happens when a Pole, a Turk, and a Brit cross paths at a funeral.
If you’re not going to Edinburgh: (and even if you are tbh) you can check out Plunge’s music video for their song Shallow.

Love Songs Underbelly Cowgate
14:40 August 2 – 26 (not 15)
A one-woman rap and spoken word show featuring get-you-on-the-dance-floor music. It’s about love, and a lot of it is about men, but not all of it. We trust Alissa’s taste in music because she’s dancing to Beyoncé in the trailer.
If you’re not going to Edinburgh Love Songs is previewing at Juju’s bar on July 23rd, when they will also be playing host to a collection of other performers showcasing extracts from their Edinburgh Fringe shows.

Elf Lyons: ChiffChaff Pleasance Dome
18:30 August 1 – 27 (not 13)
The Queen of Clown is back, with a show about Economics. We trust it’s going to be funny despite the serious topic, because Elf is hilarious, but we’re also hoping that we might learn a thing or two as well.
If you’re not going to Edinburgh you can see Elf in London, Windsor, Tring, Brighton, Bristol, Cambridge, Yorkshire, and Berlin.

Egg: Richard Pictures Pleasance Courtyard
18:00 August 1 -26 (not 13)
Sketch comedy duo Egg are back after their glorious show Egg:Static split our sides in the best way possible last year. They’re still not talking about fertility. They probably will mention feminism, though.
If you’re not going to Edinburgh Egg have loads of previews in London. 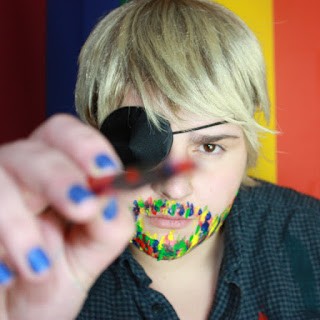 Artcoholic Just The Tonic at the Caves
14:40 2 – 26 (not 13)
Muchachico is the drag king alter ego of Spanish comedy superstar Isa Bonachera (who is ALL OVER the Fringe, hosting her own horror-comedy and cabaret variety show Late Night Evil, and appearing as one half of sketch double act Agenda Benders). Muchachico is a very bad artist, but a very funny character who we can’t wait to spend an afternoon with.

Dragprov Revue Sweet Novotel
22:00 August 2 – 26 (not 14)
Another one-to-watch for our fellow drag-addicts, this King & Queen double act, loveable soft boy Christian Adore and sassy queen Eaton Messe perform sketches and music based on audience suggestions.
If you’re not going to Edinburgh you can catch these two in London previews on July 16th & 28th.

The LOL Word Three Broomsticks
21: 15 August 4 – 25
A stand-up night with an all-queer women line-up, you say? We’ll be there with our own all-queer line-up, eagerly waiting to be picked on and/or up in the front row. 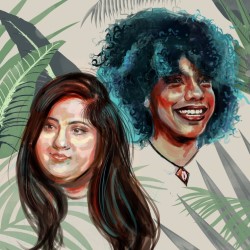